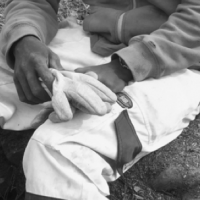 The Men on the Mountain – Mamadou’s story

When we discuss land restoration in Manarola, we recognize that it’s much easier to talk about these projects than to physically get up and do the hard-manual labor it takes to bring such plans to fruition.

He is wearing in a light green hoodie. He smiles and greets us politely as he is introduced by Giancarlo as leader of sorts. Mamadou points to the men still working, telling us where they come from and what languages they speak. As he sits down on a patch of brown soil, he pulls out a cigarette. Although slightly reserved, he settles in and starts to tell us his story.

Mamadou is in his late thirties, born and raised in Gambia. He comes from a family of farmers and fishermen. He is a father, a son, a brother, and a former student. He tells us he was born into a hard-working family. That is why he finds the restoration job in Manarola easy-going.

“This job is not difficult for me. I’m fond of hard work,” says Mamadou. This hard work includes rebuilding the stone walls, cutting grass, clearing land, and helping with any given tasks. “Anything that needs doing, we do it rapidly.”

He candidly tells us that coming to Italy was not a choice. In fact, he had never traveled before, let alone left family before, but he felt forced to leave the country and later found himself on a small dangerous boat in the middle of the ocean. “I risked my life…you have to choose either to die or live.” He states he had no guarantee of survival, “they put you inside the boats, and it’s not an easy thing.” Mamadou survived the journey and was later transported by Caritas to La Spezia to live and commute to Manarola for work. “I’m here. I’m trying to make up my life and thinking about my family so much…every second, every minute, every moment in my life I’m thinking about them.”

Mamadou tells us many times that he is happy in Manarola. When asked why, he states, “the way they are keeping us. That’s why I have been here for so long.” He later continues, “God has given me people that are treating me like my own parents.” When his instructor Giancarlo passes by to grab a work tool, Mamadou points to him and says, “especially this guy, I don’t have anything to tell him but he keeps me like his own son. He is very good.”

We ask Mamadou what he thinks life will be like five years from now. “Whatever God says will happen to a man, it will happen to the man.” He is simply focusing on the day to day work and survival. When he contemplates his future, he simply shakes his head. “I do not know what will come next; only God knows.”

Though his future is uncertain, he is reminded of his mother’s words, “be always in the positive.”

*Names have been changed by request of the interviewee for privacy purposes.