Give a Stone as gift this Christmas: you will contribute to save Cinque Terre The Men on the Mountain – Gibril’s story 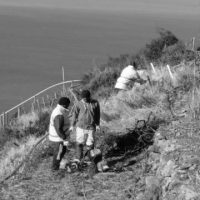 The Men on the Mountain – Boubakar’s story

Important Note: Boubakar could only communicate in French and his native language in Guinea. Therefore, we were offered the assistance of a fellow worker to translate our questions and his responses.

Boubakar was contentedly working in a shop selling goods like rice and fruit in Guinea before his life turned upside down. He is still young, married and a father to a beautiful little girl named after his wife’s grandmother. When he reflects on life in Guinea versus life in Italy, he says they are just two very different ways of living.

He tells us he did not initially plan to come to Italy before fleeing his home almost three years ago. All he wanted was to make his life better; instead, he found himself in many unfortunate situations that left little opportunity to start anew and live well.

Since being in Italy however, things have started to change for him. He is studying at a local school in La Spezia, where he truly enjoys learning Italian and English. He also started work for the Manarola Foundation and their restoration projects. 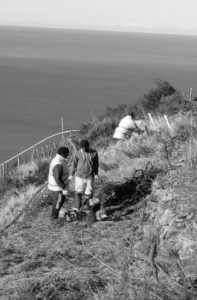 “It’s a hard job, but for everything Italians have done for me, I have to do something for them – he says – They saved my life by rescuing me from the sea,” and by making sure he was in good health afterwards”.

Boubakar tells us that the physical distance between him, his wife and child drives him crazy and he sincerely hopes to reunite with them one day in Italy. Until then, he doesn’t know what to say or think about the future. When one job finishes, he will try to find another, taking things one step at a time.

At that moment, the church bells in the village start to chime and echo their way up the mountainside where we sit on a cleared patch of dirt.  He is looking down at the village as we ask what he thinks about this place. He says, “It’s beautiful and the people are beautiful. I haven’t been here long, but I can see that the people are good and kind.”

Goodness and kindness- these are the two things that stand out to Boubakar, a young man so far from home baring a heavy load on his shoulders. He is trying merely to hold onto any kindness as he works one day at a time to create a better life and reunite with his wife and daughter.